High school a great time to think about a flying career: Super T 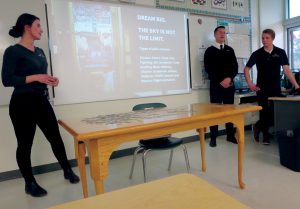 Students at Medicine Hat High School were told they can live their dream of becoming a pilot, in a presentation by Super T Aviation this week.

Obtaining a private pilot licence is the first step, and age 16 is the ideal time to start, said Tyson Phillips, flight instructor and charter pilot with Super T Aviation.

Medicine Hat College and Super T are partnering to offer an 18-month course to obtain an Aviation Management Certificate.

The MHC course is eligible for an Alberta student loan and the certificate would also go towards getting a private pilot’s licence, said Phillips.

While most people think a career in aviation means flying for an airline there are actually many more options, said Phillips. Some pilots choose firefighting, aerobatics, crop dusting, military, corporate, RCMP, search and rescue, charter flights or medevac.

“I want to fly the longest flight in the world – 18 hours,” said Phillips, who is aiming for a career with an airline.

Larissa Lindsay is a charter pilot with Super T and also has her float plane rating. She said landing on water means a little more responsibility as the pilot determines what the water is like, calm or rippling, and which direction to land.

Corporate flying can mean being on call a lot of the time but is also means plenty of time off and then perhaps flying some executives to Palm Springs for a game or golf, said Lindsay. Medevac on the other hand means you are helping to save lives.

Students responded with some thoughts of their own. One called flying “cool” and another said is was “fascinating to watch landings and take offs”.

Phillips told students he had recently done a charter from Bow Island to Humboldt, Saskatchewan that took two-and-a-half hours. Covering that distance by road would have meant six hours of driving.

Mike Andrews, commercial pilot and aviation photographer, started learning to flying through air cadets in Ontario and joined Super T a year ago. He urged students, who love the idea of flying, to start as early as possible.

Andrews said the need for more pilots is growing and most pilots are motivated by their passion for flying and are able to come up with the money to cover training. It can be tough at the entry level but there is good money to be made in aviation particularly for those who choose to fly for an airline, said Phillips.

Learning to fly in Medicine Hat has many benefits because of our sunny skies allowing for extended training periods in good weather.

Anyone interested in aviation could opt for a “discovery flight” with Super T to experience flying, said Phillips. He said the experience would help to determine if it was a passion they wanted to pursue. Earning a private pilot licence is achievable in about three months and a commercial pilot licence in about a year.

Longtime aviation local to have street named after him »