Longtime aviation local to have street named after him 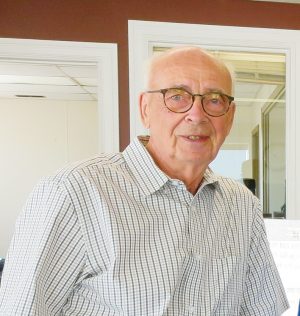 After more than 54 years in the aviation industry in Medicine Hat, the city will recognize Les Little’s contribution by naming a road after him.

Halifax Way SW, which circles the fire station at the airport and happens to be the road on which Super T Aviation is located, will become Les Little Way SW.

In 1965 Little was one of four individuals who established the Medicine Hat Flying Club. It was changed to Bar XH Aviation in about 1968 and grew from offering just flight training to include charter flights.

During Pierre Trudeau’s time as prime minister and a downturn in the oil industry things changed “a whole bunch,” said Little.

“My partners elected to get out and I elected to stay in,” said Little. “I then changed it to Bar XH Air Inc. and then we just kept growing from there.”

“I was supposed to retire,” said Little, who notes he tried it for three months and found it did not work for him.

When the new owner wanted to shut down the flight school, a new challenge emerged.

“My good wife, Terri, in her wisdom said, ‘For our retirement why don’t we keep the flight school? How much trouble can a flight school be?’” said Little. “Be careful what you ask for.”

Since then everything has been growing.

“We bought into Rangeland Helicopters and HALO and of course with Super T Aviation and Bar XH Sales we’re still very much involved in the aviation industry,” said Little.

That the road named in his honour is so close to where his business premises are located makes the gesture particularly special, he said.

“I feel very fortunate. I’m still alive to see it happen and enjoy it,” Little said with a chuckle.

« High school a great time to think about a flying career: Super T