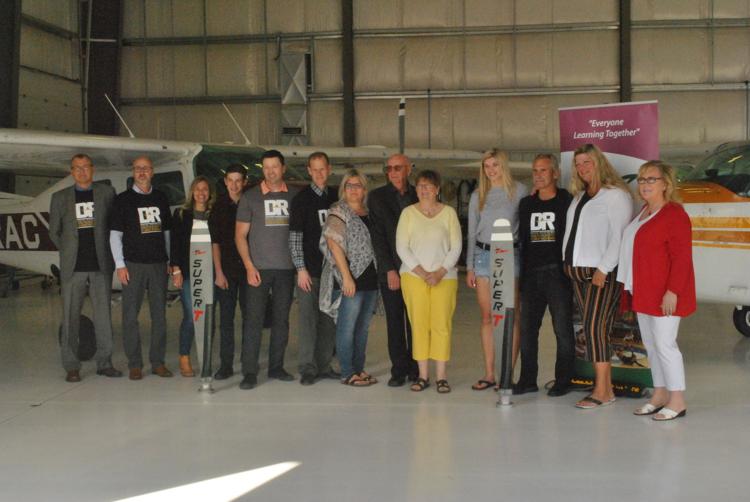 Eagle Butte High School students in Prairie Rose School Division (PRSD) now have an opportunity to broaden their horizons and spread their wings into a career in aviation with the Dave Rozdeba South Alberta Flight Academy which was officially launched on Wed., May 15 at Super T Aviation.

“This is a unique and groundbreaking opportunity,” said PRSD assistant superintendent Reagan Weeks. “We know there is high demand for pilots worldwide. The new flight academy will give our students a huge head start towards pursuing aviation as a long-term career choice.”

One student who attended the ceremony and spoke about his interest in aviation was Seven Persons student Logan Neubauer, who has been interested in aviation since watching the hit movie Top Gun and watching a Snowbirds Air Show in Lethbridge.

“Watching my first airshow in Lethbridge was another hook on the fishing rod for me,” said Neubauer, who recently joined the Royal Canadian Air Cadets and has already attended many ground schools.

Neubauer said he is excited for the flight academy to be coming to PRSD.

“I’ve never heard of a flight academy at a public school before. With this, I’m allowed to do all this at home,” he said.

Willie Dejardins, program director for the South Alberta Academy program, which also has a hockey academy said he is proud to be a part of the flight academy named in memory of local teacher, Dave Rozdeba, who had a lifelong passion for aviation.

“Passion is everything,” said Dejardins. “Dave had an enormous passion for sport, teaching, and flight. I am so proud to have the opportunity to name the new flight academy after him.”

“I think Dave would be really excited to see this happen,” he added.

PRSD superintendent Roger Clarke said the initiative falls under program development and is an expansion of the South Alberta Academy. The flight academy is a partnership between PRSD and Super T Aviation, based at the Medicine Hat airport.

“Our collaboration with the Prairie Rose School Division is a great opportunity to increase the capacity and excellence of flight training in southern Alberta,” said Super T owner, Terri Super. “Not only will this program provide students with valuable life experience, it will also create numerous career paths for them and help them set professional goals early on in high school.”

The program will offer an opportunity for students to pursue a career in an industry that is demanding more qualified pilots.

“As you may know, passenger air travel is increasing exponentially worldwide. With this growth comes significant implications for the professional pilot industry,” said Super, adding that the Air Transport Association of Canada estimates that 500,000 pilots will need to be trained globally over the next 20 years and Canada alone faces a shortage of over 6,000 pilots.

Continued on Page A10

“While attracting and retaining pilots in smaller communities is getting tougher and tougher, we are committed to do our part to train qualified pilots right here in Medicine Hat. We have the expertise to prepare students for careers in these emerging aviation markets around the world by providing pilots with the skills and knowledge to excel in their careers,” she added.

“Along with helping launch the South Alberta Flight Academy, our Integrated Airline Transport Pilot Licence program and newly announced Aviation Management Certificate through the Medicine Hat College, we hope to increase the standard and make Medicine Hat a hub for high quality flight training in Canada.”

Clarke said it is because of the dedicated partners that the Dave Rozdeba South Alberta Academy is possible.

“There is a wealth of experience at Super T for the new students to draw from,” he said.